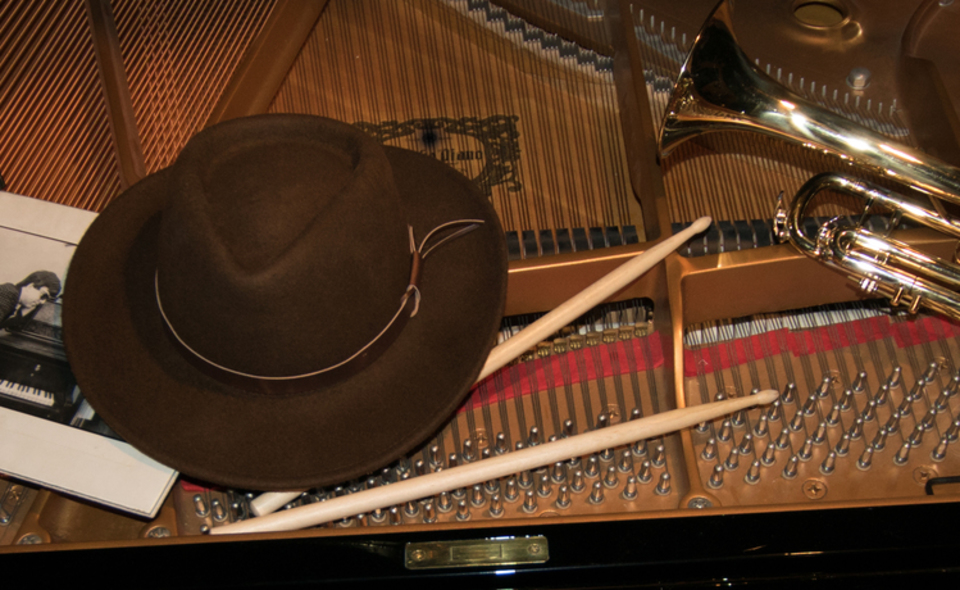 "Give him electricity, otherwise I won't play here..."

Boogie Woogie? I literally never heard of that piano style before, when I visited with some friends a concert of Vince Weber at a Jazzclub in my hometown Bremen, May 1976 . I played the piano myself, but so far I had mainly been dealing with classical music from Bach or other composers and played only some riffs of contemporary  british  or northamerican  popular music just for fun. When we arrived,  Vince was standing in front of the club in his typical black 'n white outfit, playing Blues on a Dobro guitar, singing. That music got me right away.

I brought with me my tape  machine, hoping that I could make a recording of the gig, even if I didn’t know anything about the artist and his music. I asked Vince if he would allow this. Even if we didn't know each other at all, he said "Yes, sure" without any hesitation.

So I asked the club manager if I could have electricity for the tape machine. I got some stupid, dismissive answer to that easy and harmless question. I told Vince that the recording would probably not work due to the lack of electricity. Then the unbelievable happened: Vince went to the club manager and said briefly and unequivocally: "Give him electricity, otherwise I won't play here...". That's how he was and that's how I have seen him again and again: he couldn't stand such bourgeois behaviour and reacted to it unmistakably. Then the power cord was sullenly thrown onto the stage. For us teenagers who had not even a nickel, there was the pleasant side effect that we didn't pay any admission, because from then on we were considered Vince's entourage.

So the concert began. Three sets in a total length of 2 hours. The concert was fantastic, the audience was thrilled and I was also fascinated by this musician, the powerful music and the experience in general. In a pause, Vince came to listen to the recordings so far. I gave him the headphones and started the tape. He said: "... not good!". I then realized that I had set the wrong tape speed. When that was corrected, he was satisfied. At the end of the concert he gave me 20 Deutschmark for a copy, which I sent him of course to Hamburg later on. He also said half jokingly with his typically smoky voice, but clearly: "If you‘ll copy the recordings for others, I‘ll come and strangle you!" He remembered the recordings many  years later and I was able to give him a digital copy. By the way: the Club manager then came to me and asked if he could have a copy of the recordings. I answered: "No, I`m so sorry that Vince has forbidden that bigmouths get any copy". Remember: Quid pro quo. In fact, in that case Vince would have came to strangle me, not him.

For me, this concert was the initial spark to deal with this style myself and so this evening led to an important crossroad in my musical life: towards Piano-Boogie-Woogie  and Blues. If it has caught you, it will never let you go. Vince Weber and some months later Axel Zwingenberger became soon more important to me than my musical heroes of that time: Deep Purple, T. Rex or Uriah Heep. Thank you dear Vince and dear Annette for your friendship. I‘ll never ever forget Vince. I‘ll see ´n hear you again - one day or night on your cloud No. 8 with glasses of champagne by our side, like we used to do in the last years. So long.